Robin Hood and his Merry Wins

Fill yourself with humour and adventure, all whilst winning big! 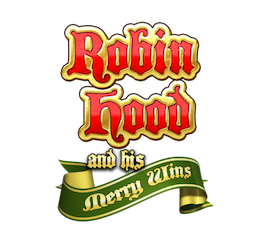 Click on 'Play/Try', then on 'Try Game' or 'Play Game' and then on ‘Continue' when the game screen opens.

To start a play, you need to choose the bet amount by pressing the plus “+” or minus “–“ on either side of the bet and press the Play button to spin the reels. Alternatively, you can press the Autoplay button.

By pressing Autoplay you will automatically play with the selected number of spins, you will be able to select your playing limits.

Only the highest win per bet line is paid.

Bet line wins pay if in succession from the leftmost reel to the rightmost reel and are multiplied by the line bet.

Wild symbols substitute for all other symbols except the Free Spins and Marian’s prize Bonus symbols.

During the base game, Wild symbols on reels 2 and 4 expand to fill their reel columns.

Free Spins are initiated when 3 or more Free Spins Bonus symbols appear in any position on the reels.

During the Free Spins Bonus game, Wild symbols are pre-expanded in groups of 3. If any portion of the expanded Wild appears anywhere on the reel, the Wild symbol will nudge to fill the reel column as a stacked Wild.

‘Marian’s Prize’ and ‘On The Mark’ Bonus games can both be triggered within Free Spins Bonus and more free spins can be initiated within the game.

'On The Mark' Bonus Game

‘On The Mark’ Bonus is an on-screen picker bonus with multiplier awards and is randomly triggered during the base game and Free Spins Bonus.

‘Marian’s Prize’ Bonus is a 5 - levelled game that is initiated when 3 or more Marian’s Prize Bonus symbols appear in any position on the reels.

Awards depend on the number of Marian’s Prize Bonus symbols that trigger the game according to the paytable.

The game has 5 levels you must pass by finding merry men behind their wanted posters and collecting credit awards.

If the Sheriff of Nottingham is revealed, then your game is over.

If you succeed past the 5th level, you can find Robin Hood for the final multiplier award and reunite him with Maid Marian.

All wins are multiplied by total bet amount.

Autoplay plays a number of spins automatically. In the Autoplay options, select the number of spins, then enter the minimum loss limit to begin Auto spins.

Autoplay can be cancelled at any time by pressing the Stop button. Autoplay will automatically stop if no spins are remaining; if any of the set limits are reached; if there is insufficient balance or if anything occurs that requires player intervention.

Players cannot be unfairly advantaged or disadvantaged by disconnections or network interruptions. In rare and exceptional circumstances where a game state cannot be restored, such a malfunction would void all pays and play.

Players may be inconvenienced or disadvantaged by poor performance as a result of technical issues such as slow network speeds or slower user devices.