Parrots of the Caribbean

‘Parrots of the Caribbean’ is a colourful, quirky slot game inspired by popular 3D animated films and familiar pirate legends. 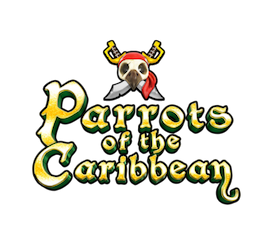 These are the Game Procedures (the PROCEDURES) for Parrots of the Caribbean (the GAME). When you play the Game, these Procedures, the Game Specific Rules for Pirates of the Caribbean, the Rules for Interactive Instant Win Games or Slots (the RULES) and the Account Terms apply. All of these documents can be found on Islands Lotto website. The Game Specific Rules can be found below.

Click on 'Play/Try', then on 'Try Game' or 'Play Game' and then on ‘Continue' when the game screen opens.

To start a play, you need to choose the bet amount by pressing the plus “+” or minus “–“ on either side of the bet and press the Play button to spin the reels. Alternatively, you can press the Autoplay button.

By pressing Autoplay you will automatically play with the selected number of spins, you will be able to select your playing limits.

Only the highest win per bet line is paid.

Bet line wins pay if in succession from the leftmost reel to the rightmost reel and are multiplied by the line bet.

Wild symbols substitute for all other symbols except the Free Spins and  Treasure Bonus symbols.

Free Spins are initiated when 3 or more Free Spins Bonus symbols appear in any position on the reels.

When a wild symbol lands anywhere on the reels, it will remain in that position until the end of the free spin bonus.

Each time a Free Spins bonus symbol lands anywhere on the reels, the player is awarded one additional free spin.

Players are represented by a pirate ship which moves around the bonus map.

Players will spin the compass (two pointers with 6 positions). The player will move the sum of the two amounts. If both compass pointers land on the same number, the player is awarded an extra turn.

Re-spins and extra turns are also gained by landing on specific spots on the map.

Black pirate flags appear on all major island attractions once they've been visited, and an award multiplier is given for each of these attractions which starts at 1 and increases each time players pass the starting position.

The multiplier has no limit.

A special prize of 25x the average bet is awarded when players have visited all major attractions. Once this award has been received, the visited attractions are then reset (black pirate flags disappear) for the next bonus game.

All win amounts will be multiplied by the total bet.

Autoplay plays a number of spins automatically. In the Autoplay options, select the number of spins, then enter the minimum loss limit to begin Auto spins.

Autoplay can be cancelled at any time by pressing the Stop button. Autoplay will automatically stop if no spins are remaining; if any of the set limits are reached; if there is insufficient balance or if anything occurs that requires player intervention.

Players cannot be unfairly advantaged or disadvantaged by disconnections or network interruptions. In rare and exceptional circumstances where a game state cannot be restored, such a malfunction would void all pays and play.

Players may be inconvenienced or disadvantaged by poor performance as a result of technical issues such as slow network speeds or slower user devices.